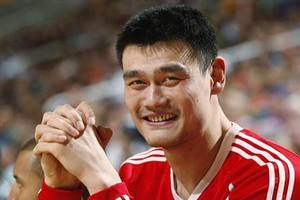 Yao Ming, one of the most beloved players in NBA history, is known for his accomplishments both on and off the basketball court. After being selected with the first pick in the 2002 NBA Draft, Yao Ming flourished as a member of the Houston Rockets for nearly a decade and was selected as an NBA All-Star five times over the course of his career. In 2003, Yao was named one of TIME Magazine’s 100 most influential people in the world. In 2008, Yao played for the Chinese national team in the Beijing Summer Olympics and was granted the honor of carrying China’s flag into the arena during the opening ceremonies. Yao called it one of the proudest moments of his lifetime.

Yao’s humanitarian career also began early in his NBA career, when he was named a global ambassador to Special Olympics (insert link:https://www.specialolympics.org/Sections/Who_We_Are/Supporters/Yao_Ming.aspx) and WildAid (insert link https://wildaid.org/ambassadors/yao-ming/). Through his work with each organization, Yao helped shed light onto issues that were very important to him: special needs children and endangered species. In 2008, Yao launched the Yao Foundation, in response to the devastating earthquake in Sichuan Province of China.  The foundation’s long-term mission is to provide educational opportunities for children in the United States and China. 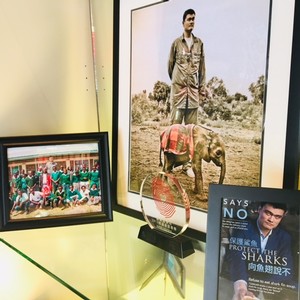 Yao’s work with WildAid has made measurable impact. Experts estimate that demand for shark fin soup in China hasdecreased by as much as 80% as a result of their joint efforts. Today, Yao and WildAid are focusing on the illegal ivory trade. After several years of bringing attention to the issue, prices and demand for ivory in China are now on the decline.

Yao Ming’s long-term mission is to help contribute to the growth and development of basketball in China, at the youth, professional and national team levels. Yao was an owner of the Shanghai Sharks, the professional basketball team in the Chinese Basketball Association that Yao played for in his youth, from 2009 until 2017. He now serves as the president of the Chinese Basketball Association.